I press the Stop Recording button. We just wrapped up the recording for our first episode, Thin Ice, and in the discussion that follows David says "I'd like to get to the point where we're talking about 50/50."

I lean into the $15 USB mic on my desk and murmer consent, but in my head I think "yea right."

That first recording was excruciating for me. I have always struggled to communicate my thoughts, ideas, and readings - and that's assuming I've got an empty page and unlimited time to work with. Trying to convey an idea verbally can feel uncomfortable and unnatural. And although I can occasionally write something in a flurry of inspiration, those moments rarely punctuate the usually tortuous and lengthy writing sessions.

At one point during our recording David prompts me to add to the discussion.

On the monitor I stare at the illuminated red circle. I watch the screen pan right, filling the void with the flat line of my silence. Five seconds go by... ten... fifteen...

"Daniel?" David's voice comes into the headphones. "Are you there? Are you okay?"

In my head I picture an office building on fire, and inside men and women run frantically to save documents flying through the air - the documents representing my thoughts. A man clutching a single page stands amidst the chaos and screams in terror "Oh God! Somebody help us!"

Thinking back to that moment, I realized that if I was going to survive as a co-host, I would have to radically re-think the way I research, and my ability to communication in general.

Start with an Outline

One thing we both identified early on was the need for establishing show outlines and general flow before recording. Focusing is easier when we are both on the same page; it reduces the chance of irrelevant ramblings, and important concepts don't get left out.

How I've incorporated outlines in my thinking and process has evolved. There was no outline the first show, and although we had one for the second, it came late in the process after a ton of open-ended research. But establishing an outline too late is problematic. Without having an objective in mind, it means research takes on a shotgun approach, information is disjointed, and the ultimate outline is forced and may lack key concepts.

A more effective approach I've experienced is to begin with a day - or several depending on the scope of the show - of open-ended research to familiarize myself with general issues surrounding a topic, then discuss with David to share ideas and establish concepts and goals. From there a basic flow can be established, and going forward a more directed approach to research can be used.

An example of an early-stage outline for our genetics episode, that went through more revisions as the research continued.

I'm still experimenting with the best way to organize notes, but there's no doubt that arranging them as best as possible along the structure of the emerging outline is ideal. To illustrate, here are two examples:

In this first example, I would read a bunch of articles or journals, paste the links directly into an Evernote page with the show title, and write out any points that stood out to me directly under the particular source. This is totally unhelpful. There's no context for anything, and trying to refer back to this list during a recording is distracting and impractical, especially if there are a bunch of technical details and figures just floating around without a framework.

In contrast, the second way organizes by themes and concepts, and typically follows a structure related to the outline. Then, as I review the notes, I can look at each theme and ask myself "do I have a grasp of simple communicable concepts related to this theme?"

And every time I ask myself that question, I imagine myself in front of the mic: will I have something to say, or will the metaphorical office building go up in flames?

This podcast is about the underlying systems of our world, so I find it useful to think in those terms.

Trying to memorize facts and details with no overarching relationships to connect them is a losing battle, and more importantly does nothing to improve my ability to communicate those facts in a way that's easy to understand and relevant to the broader underlying structure.

For this reason, I try to get a grasp of some of the systems at play, and a simple framework I might sketch out early in the research process might look like this: 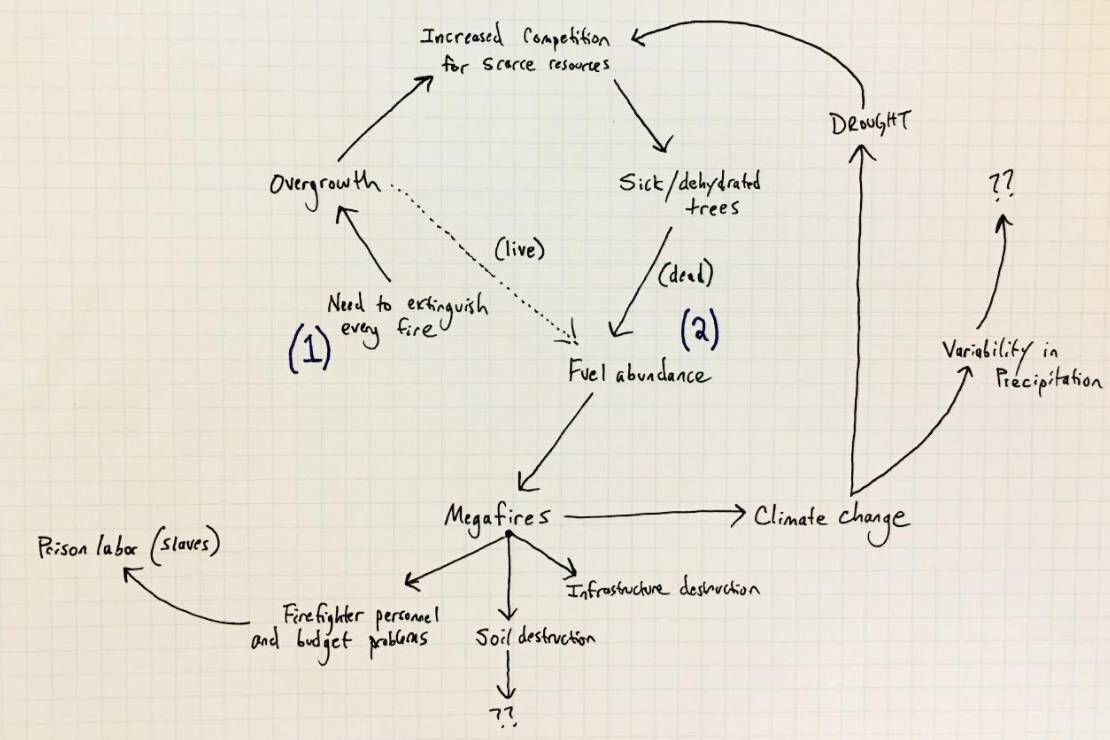 Establishing an image in my mind like this allows me to read dry facts and connect them to the larger picture. For example:

On the show we are not typically debating each other, or arguing a point. For the most part we go into them on the same page and with common objectives. Still, I have found it tremendously helpful to discuss concepts with the people around me leading up to a recording. For David and I, some of the things we discuss may seem obvious from our perspective, especially after research, but we touch on very controversial topics and not everyone will see it the way we do. For that reason, I try to remind myself to test ideas with others, especially those that may disagree. If something I say is misunderstood in conversation, it will probably be misunderstood by a listener. In addition, the people I discuss with are usually good about raising counterarguments that we might not have thought to adress on the show.

Free writing helps me when I feel like I'm missing important concepts or information, but I can't pinpoint the location of these holes.

I'll sit down with a blank piece of paper, set the timer for an hour, and just write out everything I can about a theme. As I go, I'll use a marker or something to highlight sections or facts I'm unsure of and need to research more. When I finish, it's crystal clear what my strengths and weaknesses are. I can then ignore the material I feel confident on, and focus on honing the concepts I need help communicating. 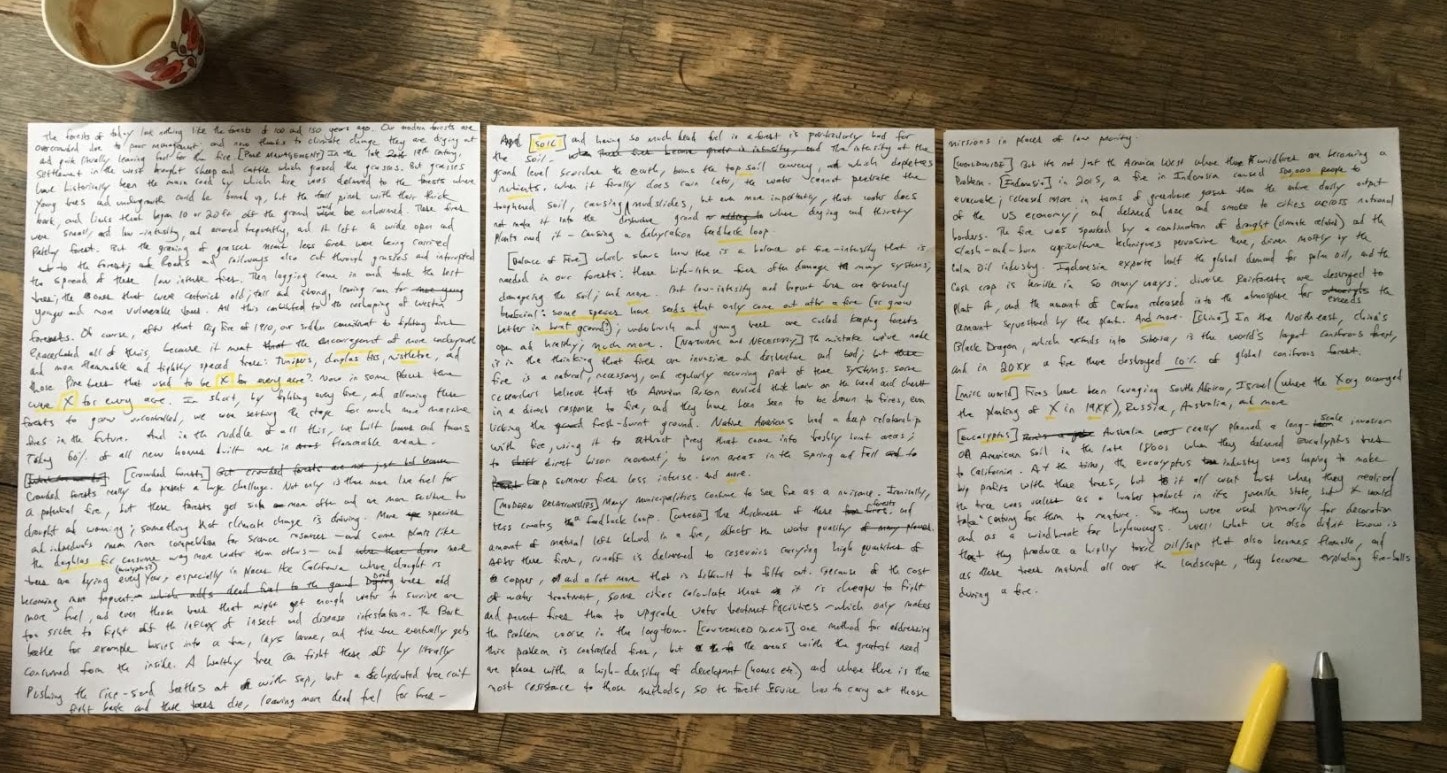 Scripts are another tool, like freewriting, for filling in the holes, and improving confidence and preparedness. They go hand-in-hand with outlines.

During a recent recording we had to stop partway through and reschedule for another day. We both felt a little off, and the flow just wasn't working out. We agree to work on the outline and try again.

For my part, I struggled because I was relying on raw notes, and the hope that I would be able to communicate coherent and compelling concepts in the moment. This was our 13th episode, and I felt confident from experience and comfortable enough with the material that I assumed I would not need to prepare any monologues. But when it came time to speak, I was fumbling with words and my tone made me sound unsure. I struggled to convey simple descriptions and concepts.

As part of preparation for part two, I knew I would have to prepare a few scripts for myself. And this is the most embarrassing part of this post; in the first draft I didn't include it.

David is a great communicator, and can improvise pretty well along concepts he's familiar with. But it's not enough for me to be familiar with the show and its direction. If I don't have something prepared to say - an opinion or observation that has been fleshed out - at each point along the way, I'm going to stumble. For this reason, it's become standard for me to drill down into the outlines we create, and write a paragraph (or three) of the most important thing I want to convey in that moment for each section.

This boosts my confidence; as long as I know the core concepts will be covered - concisely and articulately - I feel more free to relax and improvise.

Despite my progress as a communicator since that first show, I've got a long way to go, and it is still a lengthy and painful process to try and make sense of the research and synthesize it into communicable concepts and ideas.

For our wildfire episode, David suggested a descriptive introduction that we could incorporate with natural audio to paint a scene. Description is particularly hard for me, and after 2 hours I had managed to come up with just 5 incomplete sentences:

{sound of running water} The cool morning air settles in the valley, and a bull elk settles by a stream and takes his first sip. His thirst satisfied, the weight of his 700lb body shifts in the gravel embankment as he raises his head high. He listens to the morning songs of (a bird species), and his nostrils take in the sweet aroma of pine needles (and something). Then he proclaims his dominance with a screeching bugle. {sound of elk bugle} As the sound bellows its way through the valley, a clearing in the tall ponderosa pines opens {bird sounds / eagle call} to a vista of the towering and rugged, icy mountain peak jutting into the endless blue sky. {low rumbling wind}

Ultimately we decided to go a different direction with the introduction, but it was a good exercise for me.

I hope to improve my general communication skills to the point where I can become familiar with the basic concepts of a show’s outline quickly enough to spend more time on unique research - this could be a story or something historicaly interesting that's not directly related to a show's outline, but provides entertainment value or an englightening perspective - and administrative stuff like reaching out to potential interviewees.

In this process, I hope the show continues to improve, and that you, the listener, continue to join us.